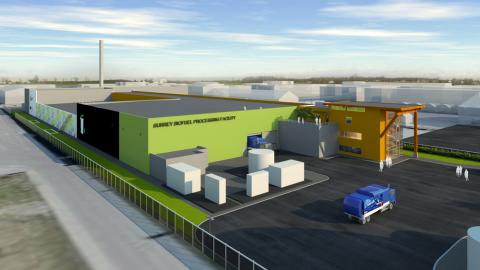 Earlier this year, Orgaworld Surrey Ltd. began construction on a biofuels processing facility to convert kitchen and yard waste from the city of Surrey, British Columbia, into renewable natural gas to fuel the city’s waste-collection trucks.
“They have done site preparation and they are now working on the foundations and will start pouring the floors of the facility,” said Paul Oostelbos, director of international business development.
The biofuel facility is being developed as a public-private partnership (P3). Orgaworld Canada Ltd., an organic waste processing business part of Shanks Group plc, contracted with the city of Surrey to develop the project. Now, its subsidiary Orgaworld Surrey Ltd. will head up the project, undertaking the design, build, finance, maintenance and operation of the facility. Multiple partners are involved with the development of the project including Stantec Architecture Ltd. to work on the design-build and services contract and the local construction company Smith Bros. & Wilson Ltd. to prepare the site, procure the equipment and materials, construct infrastructure and building components and install the equipment desired.

This project is considered one of P3 Canada’s flagship projects. The Canadian government approved Surrey’s application to the P3 Canada Fund, awarding the project a contribution up to 25 percent, or a maximum of $16.9 million, of the capital cost of the future biofuel facility. In total, the project is expected to cost 65 million in Canadian dollars ($45.9 million).

The facility is being constructed on city-owned property located in Port Kells adjacent to the Surrey transfer station in a grass building area about 14,323 square meters. The city collects waste from approximately 100,000 households, and based on recent studies, approximately 65 percent of its residential garbage is composed of organic waste that could be diverted to the Surrey biofuels processing facility. The facility will have the capacity of processing upward of 115,000 metric tons of organic waste per year. A majority of the feedstock—80,000 metric tons per year—will come from Surrey’s residential curbside collection program, and some commercial organic waste will also be processed, supporting the Metro Vancouver Food Scraps Recycling Program.

The plant is being implemented as the second phase of the Surrey’s Rethink Waste Program. “The city of Surrey wanted to close the loop,” Oostelbos said. “They want to convert their source-separated organics into biogas that would be used to fuel their waste collection trucks and their city fleet.”

According to Oostelbos, the city has a local objective to divert more than 70 percent of waste from the landfill through alternative reuse, increased recycling and material recovery programs. “By closing the approach we will convert their source-separated organics—the kitchen waste, garden waste—into mainly two products,” Oostelbos said. “One is the biogas, which will be upgraded into natural gas quality. The second product is compost, which can be used as an organic fertilizer for agricultural reasons and various applications within the city.”

More than 20 waste trucks will be fueled with compressed natural gas (CNG) at peak site capacity. Upon arrival in the CNG-fueled trucks at the west entrance of the building, the waste is then stored, shredded, processed to produce gas, composted, screened and shipped out from the north exit. Shredding equipment will be located in the facility’s entry, with loaders transporting the waste within the facility, the storage bays, reactors, composting tunnels and the compost storage bays. Within the screening halls, equipment will sort the compost and move it via overhead conveyors into the composting storage areas. The facility will produce approximately 35,000 metric tons of compost per year.

The anaerobic digester (AD) technology being implemented is Orgaworld’s Biocel, dry AD equipment, already implemented by the company in the Netherlands. Oostelbos said the process requires very little pretreatment. The gas-upgrading equipment provider for the project is still under negotiation. “What we see in North America is that more and more cities are changing to CNG-fueled trucks, and that they also have to look at the amount of food and kitchen waste going to the landfill,” Oostelbos said. “I think there is a great opportunity for these types of projects in North America.”

The projects anticipated service commencement is in early 2017. “It’s the first and largest of its kind,” Oostelbos said. “The combination of dry AD with composting allows us to produce quality products. We also have 2 or 3 percent of material like plastics that we will convert into alternative fuel for the local cement industry. We tried to avoid as much landfilling as possible.”

The project has also been nominated for a number of awards including the National Award for Innovation and Excellence in Public-Private Partnership in the category of project financing of the Canadian Council for Public-Private Partnerships. It has also been shortlisted for the 2015 P3 Awards for the category Best Waste/Energy/Water Project, which they will receive notification about Oct 8.